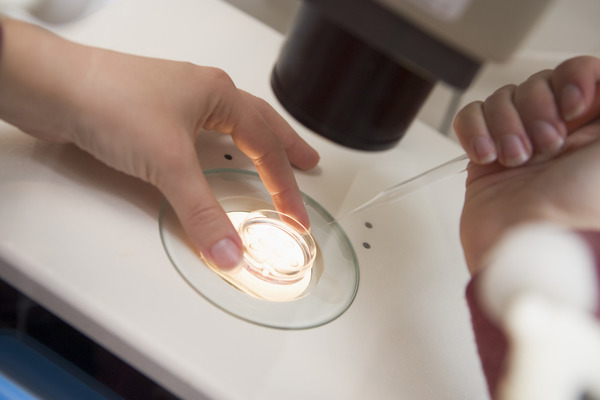 Assisted oocyte activation is an additional procedure performed in order to increase IVF ICSI success rate. After injecting oocyte with a selected sperm, it is placed in the special medium containing calcium ionophore. Activation increases the amount of fertilised oocytes and therefore the quantity of the embryos.

Cooperation of the egg cell and the sperm

During the fertilisation process the concentration of free calcium ions and their oscillation within the egg cell increase due to the presence of a catalyst in the sperm cell. It is a crucial step in the process of activating the egg cells: the meiotic cell division finishes and pronuclei are released - that process indicates that fertilisation has occurred. Proper oscillation of the calcium ions is required for successful fertilisation and necessary to initiate the first cell divisions. Sometimes however the process of activation does not proceed correctly. That is why it is necessary to use a special medium containing calcium ionophore, which imitates the natural process – that leads to the surge of concentration of the calcium ions within the egg cell and eventually activates it. Ionophores are the particles, which can transport calcium ions to the inside of the egg cell.

Oocyte activation is an option designed to help couples with relatively low percentage of fertilised egg cells (below 30%), which can be a result of catalyst deficiency in the sperm cells or a dysfunction in the metabolic process within the egg cell. This method is usually performed in case of abnormal result of semen analysis, especially when a patient suffers from advanced teratozoospermia, kryptozoospermia or if the semen used in the ICSI procedure has been collected by testicular biopsy method. It is also recommended option in cases when cells divisions in the embryos have been delayed or stopped in the previous cycles.

international@klinikabocian.pl
Please call our International Patients Department or fill out the form below to request more information about treatment options at our clinic. One of our English speaking coordinators will provide you with detailed information. Name * E-mail Phone* I want to ask about:

Please confirm you are not a robot: *
* Required fields